The vast majority of manuscripts in the DLLM collection are in the Lao, Northern Thai, Tai Lue, and Tai Nuea languages, which belong to the Southwestern subgroup of the Tai-Kadai language family, or are bi-lingual Pali-vernacular texts. A considerable number of texts are in monolingual Pali, a small number are in Central Thai, and a single Tai Dam text is also included in the collection.

In general, each of the vernacular languages used in even the older manuscripts is understandable for contemporary speakers of that language who are familiar with the terms and idioms of traditional literature. The written languages of Lao, Northern Thai and Tai Lue are to a large extent mutually understandable, due to shared lexicon and syntax, while the pronunciation differs considerably.

See the bibliography below for related resources.

The SEAsite of the Center for Southeast Asian Studies at the University of Northern Illinois contains information, online learning resources and links related to the vernacular languages found in the DLLM collection. For Northern Thai, see the Tai Lanna section of the site. The Tai Dehong section provides a useful introduction to the Tai Nuea language as used in the Dehong Dai and Jingpo Autonomous Prefecture of Yunnan Province, China, including the Introduction to Luo Yongxian’s Dictionary of Dehong, Southwest China (see bibliography). It should be noted, however, that the Tai Dehong dialect differs from that of the Tai Nuea in Northern Laos.

The oldest dated manuscripts from Laos and Northern Thailand, which are from the late 15th century, are in monolingual Pali. A huge number of texts containing Pali-vernacular translations, glosses, and elaborations is also to be found.

The Pali used in texts in Southeast Asia, especially Thailand, Laos and Cambodia, often diverges from the orthodox form of the language, such as laid down in Kaccāyana’s grammar. In bilingual texts, the vernacular can provide important information about local understanding or interpretation of the Pali.

‘Monolingual Pali’ was used as a manuscript category in the Preservation of Lao Manuscripts Programme to enable scholars not familiar with the vernacular languages to find monolingual texts. In the DLLM inventory, ‘Monolingual Pali’ is found under Languages, and all texts which previously had that PLMP Category (i.e. 04) have been assigned new categories.

The Pali-English Dictionary of the Pali Text Society is available online as part of the Digital South Asia Library, a project of the Center for Research Libraries and the University of Chicago.

The majority of manuscripts in the collection are written in variants of the Tham or Dhamma script. Others are in the Lao Buhan, Lik Tai Nuea and Khom scripts, while a few remaining texts are in Central Thai and Tai Dam scripts. All of these can be traced to South Indian writing systems which were adapted for writing Pali and vernacular languages in Southeast Asia.

The Tham script shows a strong similarity to the Mon script used in inscriptions in the ancient Mon kingdom of Haripuñjaya (present-day Lamphun Province of Northern Thailand), dating from the 13th century CE. The oldest dated document using the Tham script, from CE 1376, is a bilingual inscription on a gold folio discovered in Sukhothai, containing one line of Pali language, while the vernacular is in Sukhothai Siamese language and script. The Tham script was adapted for the writing of vernacular languages not later than the 15th century CE, most probably in Chiang Mai, from where it spread to neighbouring Tai-Lao kingdoms. The oldest known dated manuscript using Tham script (not included in the DLLM collection) is a monolingual Pali copy of a section of the Jātaka-aṭṭhakathā-vaṇṇanā, from CS 833 or CE 1471, kept at Wat Lai Hin, Amphoe Ko Kha, Lampang Province, in Northern Thailand. The oldest known dated manuscript in the DLLM collection (in Tham Lao script) is a monolingual Pali copy of part of the Parivāra (PLMP Code 06018504078_00), from CS 882 or CE 1520, kept at the Provincial Museum in Luang Prabang (formerly the Royal Palace). Versions of the Tham script continue to be used to this day by the Lao, Northern Thai, Tai Lue and Tai Khuen. One can therefore refer to a ‘Tham script domain’ comprising present-day Laos, the Upper North and Northeast of Thailand, the Northeast of Myanmar, and the Southwest of Yunnan Province in China.

The Lao, Lan Na, and Tai Lue versions of the Tham script are very similar, and texts in these scripts from can be read by anyone who is literate in any one of them, and most of the contents can be understood. Characteristic features of these scripts are that the inventory of 33 consonants is in concordance with that of the Pali language, and that the second components of consonant clusters are written beneath the first. Likewise, most syllable-final consonants in vernacular texts are written beneath the preceding vowel symbol. The form of some of these subscript consonant symbols differs considerably from the standard symbol. In contrast to the Thai and Lao alphabets, the Tham script uses special ‘independent’ symbols for syllable-initial vowels in Pali texts. Another special feature is the use of various ligatures and abridged forms of certain frequently used terms. The orthography of vernacular texts written in the Tham script is much less ambiguous than, for example, that of the modern Central Thai writing system.

In Laos, the Tham script was generally reserved for religious writings, whereas texts which were considered secular were written in Lao Buhan, the precursor of the modern Lao script. A considerable number of works with identical titles are found in both Tham and Lao Buhan scripts. In most of these cases, the Lao Buhan versions are literary adaptations of religious works, intended for use by the laity. Neither Tham nor Lao Buhan scripts use tone markers, and remarkable variations in the writing of Lao Buhan add to the difficulty of reading this script.

The Tai Nuea script belongs to a group of Indic-based scripts known as lik, which are thought to date from before the 14th century CE. Related scripts are used by the Tai Nuea (Tai Le) in the Dehong region of Yunnan Province in China, and by Tai Khamti, Tai Phake, Tai Aiton, Tai Ahom, and other Tai peoples across Northern Myanmar and into Assam State of Northeastern India. Several of the consonant symbols are similar to Tham script, while others bear no clear resemblance to their Tham equivalents. In contrast to the Tham script, the very limited inventory of 16 to 18 consonant symbols indicates that these scripts were perhaps not developed for writing Pali. Even for vernacular texts, the number of consonant and vowel symbols is less than the phoneme inventory. Together with minimal written indication of tones, this makes the orthography ambiguous, with several possible readings and semantic interpretations for some written words. While the Tai Nuea manuscripts in the DLLM collection are all kept in Mueang Sing District in Northern Laos, their provenance covers a much wider area including parts of Yunnan Province in Southwestern China and Shan State in Northeastern Myanmar, from where the Tai Nuea inhabitants of Mueang Sing migrated, and there is a corresponding variety in the form of the scripts used. Many of the texts appear to be in an old form of the Lik tho ngok or ‘bean sprout’ script previously used by the Tai Mao. This differs somewhat from the old Tai Dehong script and from the reformed version of Tai Dehong script introduced in China in the mid 1950’s, which are better known examples of this type of script.

The Cambodian or Khmer script is considered to have developed from South Indian sources, but independently from the Mon script. The Khom form of this script was used for writing Buddhist texts and other treatises in Central Thailand until the early 20th century, when it was gradually replaced by Thai script. The DLLM collection contains a number of manuscripts in Pali, Lao or Thai languages, written in Khom script, from Southern Laos. Like the Tham script, it contains the full inventory of consonants in concordance with the Pali language, and uses subscript consonant symbols, as well as ‘independent’ symbols for syllable-initial vowels. Additional consonant and vowel symbols are used for writing the Thai and Lao languages. The Khom script used in Thailand is very similar to the aksar khom and aksar mul forms of modern Cambodian script which are used for titles of publications, etc. While these differ from the aksar chriang and aksar chhor styles which are used for general text in modern Cambodian publications, an understanding of modern Cambodian orthography, such as found in Huffman (1970) is still useful. Aripong (2003) provides a thorough (Thai-language) description of Khom script as used in Thailand.

Introductions to the Lao, Lanna (Northern Thai), Khmer, (Central) Thai, and Tai Dam scripts can be found in Omniglot, an online guide to the writing systems and languages of the world.

The SEAsite of the Center for Southeast Asian Studies at the University of Northern Illinois contains information, online learning resources and links related to the scripts found in the DLLM collection.

Filliozat_1992
Filliozat, Jacqueline, ‘Documents Useful for the Identification of Pāli Manuscripts of Cambodia, Laos and Thailand’ in Journal of the Pali Text Society XVI (1992): 13-54.

Hundius_1990b
Hundius, Harald, ‘The Colophons of Thirty Pāli Manuscripts from Northern Thailand’ in Journal of the Pali Text Society, XIV (1990): 1-173. 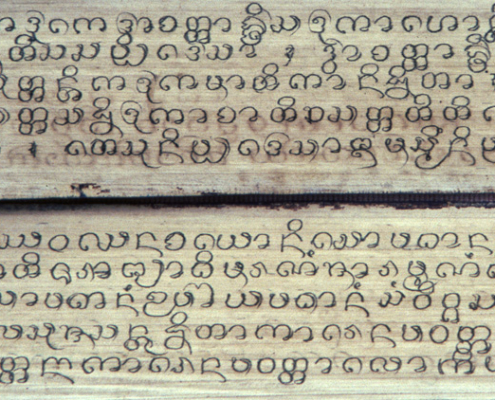 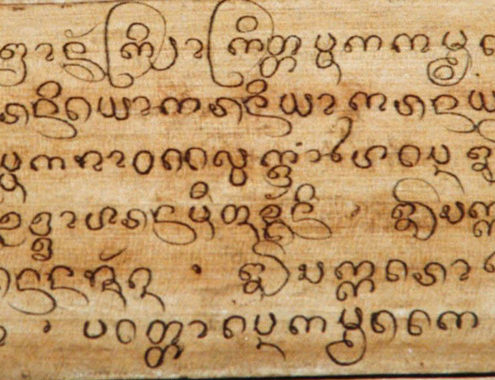 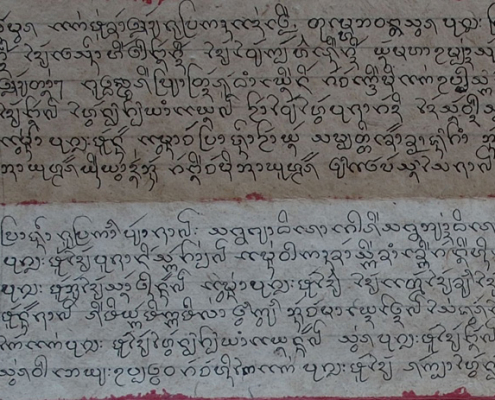 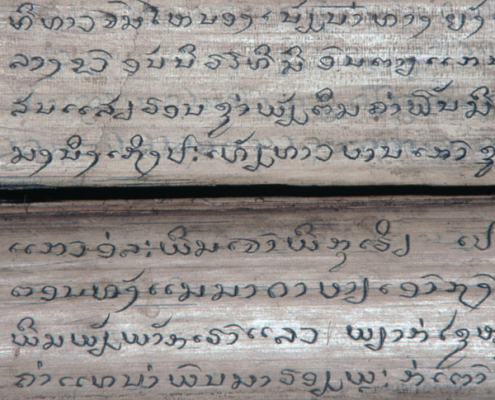 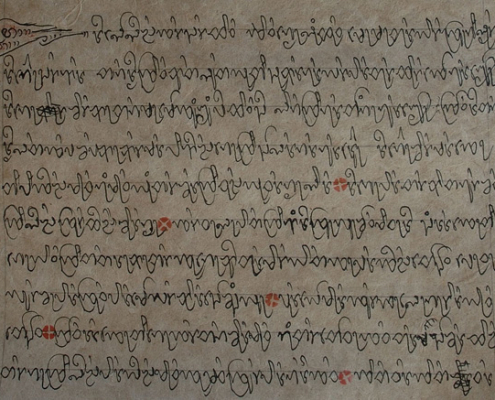 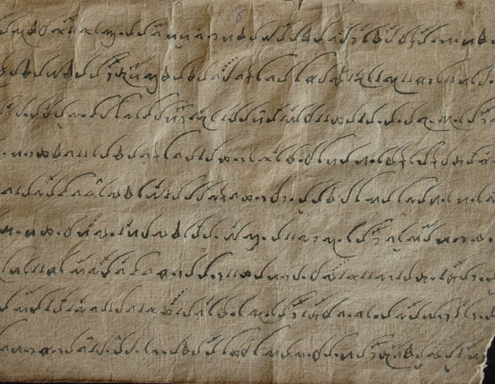